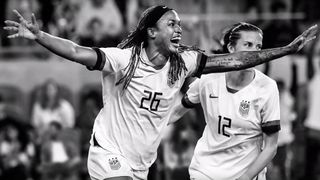 Yesterday, the United States women’s national team (USWNT) defeated the Netherlands to secure their second consecutive World Cup. Immediately after the 2-0 win in France, Nike aired an empowering minute-long ad celebrating the players and acknowledging the impact their success will have on future athletes. The message of the campaign is that when “This team wins. Everyone wins.” Watch above.

Goals by tournament top scorer and best player Megan Rapinoe and Rose Lavelle helped the American women to their fourth World Cup in total, having won in 1991, 1999, and 2015. The USWNT have now won half of all women’s World Cups ever held.

Aligning itself with the US women’s team has proven extremely profitable for Nike. It has sold more of this USWNT World Cup jersey on its online store than any other US national team jersey, women or men’s, in history.