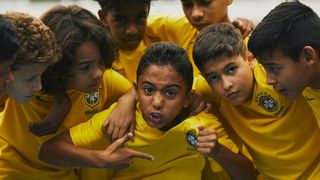 Every large sporting event is an excuse for brands like Nike to pull out all the stops and create an advert that blows viewers away and is as memorable as the tournament itself.

And while Nike generally does that to great effect, its latest ad, centered around Brazil ahead of the 2018 FIFA World Cup, is the best we’ve seen in a while from the Swoosh. The footage has us reminiscing about the golden days of soccer spots, like the iconic Nike airport scene or Pepsi’s gladiators.

In the video above, we see a mixture of Brazilian stars and hopeful kids kicking the ball around on various indoor and outdoor pitches, even featuring a cameo by none other than the original Ronaldo in – you guessed it – an airport.

Watch the fun clip above, leave your thoughts in the comments, and then enjoy some classic soccer ads below.

Next, check out 10 jerseys we wish were officially part of the World Cup here.