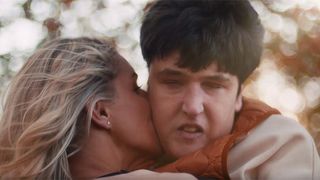 Titled “Carry Me,” the one-minute video highlights Delle Donne and her close-knit relationship with sister Lizzie, who has cerebral palsy and autism. As Lizzie is also deaf and blind, her only way to communicate is through touch and smell.

Although Delle Donne can be seen carrying her sister throughout the video, the Washington Mystics forward admits that it’s Lizzie who carries her. That’s because Delle Donne has always made most of her career decisions based on Lizzie and the distance from her.

Last summer, Delle Donne also released a basketball sneaker inspired by her sister — the Nike Air Zoom UNVRS, which featured inclusive messages such as: “If you have a body, you are an athlete.”

Nike Launches Its First-Ever German “Just Do It” Campaign
LifestylesponsoredNovember 5, 2019