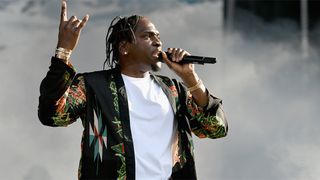 An early version of Pusha-T‘s track “Santeria” has leaked, featuring the hook sung by Kanye West instead of 070 Shake.

It’s definitely a demo rather than an alternate final version, as Kanye’s vocals sound fairly rough and were probably intended simply as a reference for later. Regardless, it’s an interesting take on the track, and lends a different vibe to the final version with 070 Shake’s hook sung in Spanish. Listen to it above before it gets taken down.

For comparison, take a listen to the final version from Pusha-T’s 2018 album DAYTONA below.