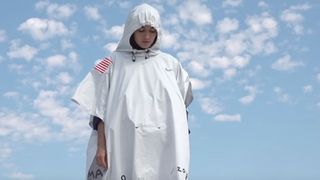 According to Nike, the new poncho design was “perfected over the course of four years, dozens of prototypes, countless tests and innumerable hacks.” Sachs worked with Jarrett Reynolds, Nike’s senior design director for apparel special projects, to perfect the idea of a waistbag fitted with a quick-deploy poncho that could be swiftly unpacked and packed. The poncho includes technical details like Dyneema®️ fabrics and a magnetic Fidlock buckle.

Sachs explains overcoming certain design obstacles while working on the Exploding Poncho by noting, “Through a lot of exploration and testing, the studio was able to find opportunity to push on an idea that had been stuck. We simplified the deployment mechanism and the repacking mechanism. We integrated things like a drag-racing inspired parachute release mechanism, an extension flap to the poncho and the fanny pack.”

The poncho is part of a forthcoming collection called NikeCraft Transitions, which also includes a pair of down-filled shorts and the Mars Yard Overshoe.

The apparel component of the collection launches launch April 27 in Japan as part of Sachs’ “Tea Ceremony” exhibition at Tokyo Opera Gallery. A global release will be announced later.

These Tom Sachs Nike Football Concepts Are Next Level
SneakerssponsoredApril 28, 2020