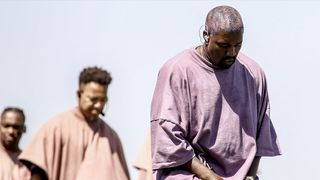 Kanye West‘s most recent Sunday Service, held in his birthplace of Atlanta, Georgia, is now available to stream on YouTube. The hour-long “musical ministry” includes a gospel reworking of Ginuwine’s “So Anxious” as well as a rendition of “Father Stretch my Hands” from The Life of Pablo. Watch the full service above.

West presided over the majority of the service, offering personal anecdotes about his own life and spiritual journey. An attendee told Atlanta News Now,  “I wasn’t expecting him to give his personal revelations as much as he did.” He added,  “I thought it was just going to be music. I wasn’t expecting that but I liked it.”

Following the service, West flew to Batesville to introduce an emerging acoustic band called Infinity’s Song on the Batesville leg of their national tour. During his introduction, he told the audience that his forthcoming album, Jesus Is King will indeed arrive on September 27.

Today was the Batesville Indiana stop on our national home concert tour. It. Was. CRAZY!!!! Thank you to Walhill farm and the Abdalla family for hosting.. and thank you to #Kanye for flying in just to kick it with us. Thank you to everybody that came out and supported🙏🏾♥️ Also, y’all should come to our next show 😉 📷: @cityofangelll

Watch What Went Down at Kanye West’s Surprise Sunday Service in Paris
MusicsponsoredMarch 1, 2020