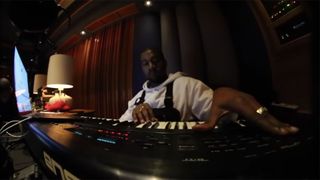 The A$AP crew dropped the latest installment of their AWGE DVD series Monday night. AWGE DVD Vol. 3, the latest from the mysterious creative collective, notably included A$AP Rocky and Tyler, the Creator’s new song “Potato Salad” and the announcement of their ‘WANGSAP’ collaboration. The 48-minute short film includes plenty of appearances from the rest of the crew and their friends – A$AP Nast, A$AP Twelvyy, A$AP Ferg, Playboi Carti, and Skepta, to name a few.

The most exciting cameo is by none other than Kanye West. The rapper and producer can be seen in the studio with some A$AP Mob members, making beats and freestyling with Rocky and Ferg. Check it out in the video above at the 16:30 mark.

Elsewhere in the video, you can catch Tyler, the Creator dancing in the street to a Playboi Carti song and an unreleased Lil Uzi Vert music video.