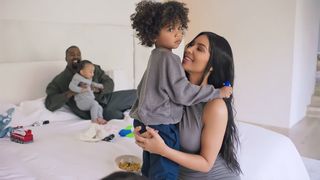 The video gets off to an amusing start with Kanye opening the door, until Kim comes to take over, saying, “Uh, babe? This is for me.” As she leads the camera through the bright entrance hall, she’s asked how she’d describe the home, and answers “a minimal monastery.” Kim then reveals the inspiration for the interior design came from “Axel Vervoordt and Kanye.” Belgian designer Vervoordt is famed for his minimalist interiors.

As we follow Kim into the bedroom, we come across Kanye playing with their 3 children. The couple answer some sweet questions about parenting, with Kim saying the most rewarding thing is when they “tell you they love you,” and Kanye simply stating that the best thing about being a dad is “the kids.” The bed on which they’re all playing is a gigantic, yet sleek affair, with crisp white linen and a cream headboard. As for the room itself, it features light grey wooden floors, a huge white rug, and a bright, airy vibe.

After answering a few more questions as a couple, Kim takes the interviewer into the living room via a seemingly endless pastel hallway. As they walk down the hall, she reveals she respects her mom’s career the most, and is also over the phrase “it’s lit.” The living room features a beautiful, unbleached Steinway piano.

The tour continues to the kitchen through a few more pastel-colored areas, a theme that seems to be present throughout the entire home. The kitchen is of course gigantic, with a massive island and endless benches – enough space to fit the whole Kardashian clan, and more. She also touches on studying law, as was revealed in Vogue yesterday.

Kim discusses a whole lot more during the interview. Watch the video above.

For a deeper dive into home decor, peep the video below.

This Is How Kim Kardashian & Kanye West Are Decorating Their Home This Christmas
DesignsponsoredDecember 9, 2019