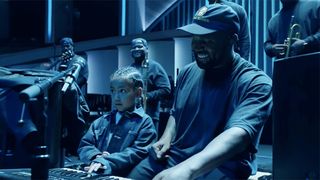 There, Kanye West and his choir performed songs from Jesus Is King, such as “God Is” and “Follow God,” as well as secular-turned-gospel songs such as Destiny’s Child’s “Say My Name” and A$AP Ferg’s “New Level.” Watch the whole performance above (starting around the 45-minute mark) and highlights below.

During his time at the megachurch, Kanye also made a speech discussing his relationship to God and music. “I know that God’s been calling me for a long time and the devil’s been distracting me for a long time,” he said before announcing plans to bring musicians back to the church.  “We have writers. We have producers. We’re taking all the most fire producers and bring them back to God.”

Speaking about The Life of Pablo, Kanye revealed that he “didn’t know how to make a gospel album.” He continued, “The Christians I was around were beaten into submission by society, and they would not profess the Gospel to me, because I was a superstar. But the only superstar is Jesus.”

Kanye West and his choir play “New Level” by ASAP Ferg and the crowd was lit ? #LakewoodChurch pic.twitter.com/YNAGjc4zaL

Why Kanye West’s Links to Televangelist Joel Osteen Could Have Sinister Undertones
MusicsponsoredDecember 17, 2019

Kanye’s Sunday Service at Joel Osteen’s Houston Megachurch Will Be His Biggest Yet
MusicsponsoredNovember 13, 2019