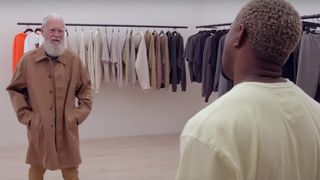 The brief video showcases West styling Letterman in YEEZY garments for the show. Kanye jokingly mentioned dressing the 72-year-old talk show host was like when he used to work at Gap. After suiting Letterman up in the YEEZY threads, Ye showed Kim Kardashian the makeover, which she unsurprisingly approved of. Letterman himself raved about the outfit, saying he would actually go to the store and buy it, as he specifically liked the colors, the fit, and the shoes.

Press play above to witness Kanye styling David Letterman, then be sure to check out the highlights from Ye’s appearance on My Next Guest Needs No Introduction here. You can also watch episodes with Ellen Degeneres, Tiffany Haddish, Lewis Hamilton, and Melinda Gates now on Netflix.

Kanye West Is Ready to Bring YEEZY Production to the US
SneakerssponsoredJune 30, 2020