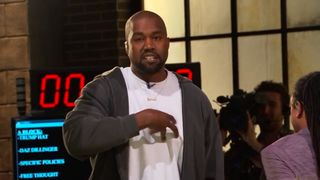 Following his lengthy interview with Charlamagne Tha God, Kanye West paid a visit to the TMZ newsroom. While on camera, West dove deeper into his positioning on Donald Trump, slavery, and free thought.

“I just love Trump. That’s my boy,” Kanye stated rather emphatically. He then went on to insist that Trump is one of rap’s favorite people, namely before he was elected president.

In transitioning, ‘Ye voiced that he feels he’s been minimized or put into a box. Then, he undoubtedly ruffled feathers when suggesting that slavery was a choice.

After West’s time speaking with Harvey Levin, one particular TMZ staffer, Van Lathan, expressed his disappointment with Kanye’s recent behavior, saying, “You have morphed into something, to me, that’s not real.”

Lathan also just had Charlamagne Tha God call in to his The Red Pill podcast to discuss Kanye.

New Red Pill is up w/ @cthagod calling in. All about Kanye. Link in bio. WARNING, I’m mad.

Nonetheless, press play above to see ‘Ye get the TMZ newsroom in a stir.

In related news, Questlove recently wore a “Kanye Doesn’t Care About Black People” T-shirt at a concert in Alabama.