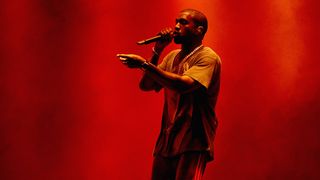 After linking up with 070 Shake, Kid Cudi, and Tony Williams to rework some of his older tracks during his first “Sunday Service” session, Kanye West debuted a new track at the second session this past Sunday.

The track is reportedly called “We’ll Find a Way” and is rumored to be part of West’s upcoming YANDHI album. Performed by the “Sunday Service” gospel choir and shared via a Kim Kardashian Instagram story, the song, as its title suggests, delivers an inspirational message through its lyrics.

YANDHI was announced by West last year, but has since faced several delays. While we’re all waiting, you can catch further footage of West’s “Sunday Service” below.

#SundayService. The last image is me in all of Kris Jenner’s live-streams. The energy was high in the room.

Just hearing music as our Sunday Service was super inspiring. See you next Sunday ✨

Now, find out everything we already know about ‘YANDHI’ here.