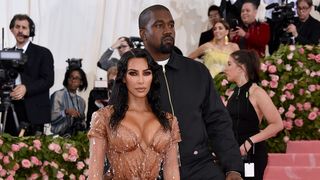 The 2019 Met Gala has come and gone, but coverage surrounding one of the year’s biggest events continues. Here, we find cover girl Kim Kardashian dishing on her Met Gala outfit, all while getting ready for the memorable evening.

Kim began by disclosing that she pre-ordered two dozen of her favorite donuts to be delivered the day after the gala. Just one look at her waist in that Thierry Mugler dress and it’s not hard to decipher why. Referred to as the “wet look,” the majority of her outfit was made out of silicone, and it was so form fitting that she could barely sit.

Kim also revealed that she would often dream about attending the Met Gala years before she was catapulted to fame. She told Vogue that as soon as this year’s theme was announced, she got on the phone with Kanye to discuss what to wear.

And speaking of Kanye, Kim said that at just two days before the event, he had no idea what he was going to wear. We now of course know that he chose to keep it simple with a $43 Dickies jacket that you can easily get your hands on. Furthermore, the 38-year-old beauty revealed that Ye insisted Met Gala 2019 was all about her, and that he was merely there to be her plus one and fade into the background.

To hear Kim Kardashian dishing on Kanye and her Met Gala outfit, simply press play above.

Kanye West Wore a $43 Dickies Jacket to the Met Gala & You Can Buy It Here
MusicsponsoredMay 7, 2019
Follow
Highsnobiety Style
What To Read Next
Load More
Search Results
Load More