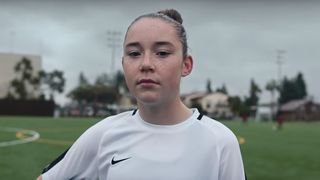 “If we show emotion we’re called dramatic. If we want to play against men, we’re nuts. And if we dream of equal opportunity, delusional,” Williams says while footage of famous women athletes plays.

“When we stand for something, we’re unhinged. When we’re too good there’s something wrong with us. And if we get angry, we’re hysterical, irrational, or just being crazy,” Williams continues.

The ad reminds us how feats like a woman running a marathon, boxing, dunking, coaching an NBA team or “winning 23 grand slams, having a baby, and then coming back for more” were all considered crazy — until somebody did it.

Watch the commercial above, and in case you missed it, Colin Kaepernick’s “Dream Crazy” ad below,

A Conversation With LeBron James Convinced Nike to Run the Kaepernick Ad
SportssponsoredMarch 10, 2019