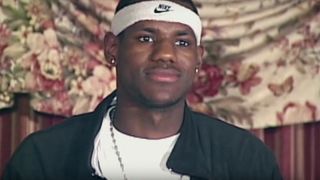 Ahead of LeBron James’s LA Lakers debut last night, Nike released a new “Just Do It” ad tracing the star’s journey from a small-town kid from Akron, Ohio to the NBA legend he is today.

The classic James ad features footage of an interview from 2003, when Cleveland had just won the then projected top pick in the NBA Draft Lottery. He told reporters that he didn’t feel any pressure and that he doesn’t guarantee a championship. 13 years later, James captured his third NBA title to end Cleveland’s championship drought.

“It hasn’t kicked in yet, to what I’m getting myself into. I’m not going to guarantee no championship, I’ll tell you that,” he says in the interview. “I just hope they accept me for who I am as a basketball player, especially as a person. I know how to be a leader. It’s just a long term, I always tell y’all that, this was one of the long term dreams that I’ve always had. That’s just playing in the NBA.”

Now, LeBron James is an NBA superstar (four-time NBA MVP, three-time NBA champion, two-time Olympic gold medalist), a philanthropist, an activist, a businessman and so much more. Watch the ad above.

One of the Best Nike LeBron Sneakers Ever Is Returning
SneakerssponsoredFebruary 10, 2020

Nike Preps the LeBron 17 for the “Red Carpet”
SneakerssponsoredOctober 28, 2019

LeBron James & Nike Want You to Draw all Over Your AF1
SneakerssponsoredSeptember 24, 2019
Follow
Highsnobiety Life
What To Read Next
Load More
Search Results
Load More