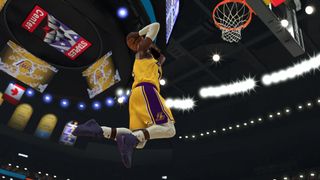 Prepare to flex your MyPlayer baller more than ever. Nike’s SNKRS app is teaming up with the video game NBA 2K20 to bring limited editions sneakers to the digital courts.

Players will be able to unlock their favorite sneakers exclusively through gameplay in NBA 2K20’s new MyPLAYER Nation mode. A total of 10 gamer edition (GE) models will release through the 2K20 game experience during the 2019-20 NBA season. Nine of them will connect directly to Nike MyPLAYER Nation milestones, while the tenth will be unlocked through a surprise Nike SNKRS cam execution.

The first GE drop for the event will be the LeBron 17 “Bron 2K”, a colorway flooded with the iconic Lakers purple. The special edition will also feature the 2K logo and game’s “Welcome to the Next” tagline. The shoe will be available on October 29.

The latest partnership between NBA 2K20 and SNKRS will kick off on October 22. Physical GE sneakers can only be purchased in the United States; virtual versions are accessible to all 2K players.

Take a Look at What Could be Next Year’s “Game Royal” Nike Air Jordan 1
SneakerssponsoredDecember 27, 2019