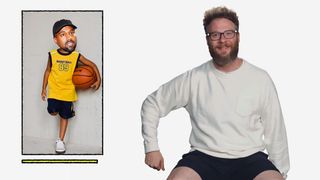 Seth Rogen recently got together with Rolling Stone for a quickie interview. During the sit-down, Rogen details meeting Kanye West for the first time, making out with James Franco, and shoving beef jerky some place other than his mouth.

We find out that not only did Kanye call Rogen a funny motherfucker, but he also invited him to play basketball, but unfortunately, the actor was too hungover.

And while speaking on locking lips with his pal James Franco, Seth also revealed there was a third person in the mix.

Yeah, press play above to watch the hilarious segment.

James Turrell’s Roden Crater: What We Know About the Visionary’s Upcoming Masterpiece
DesignsponsoredOctober 23, 2019