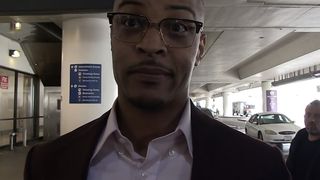 Following a recent radio appearance on Hot 97, T.I. caught up with TMZ at LAX airport to share his thoughts on Kanye West’s slavery comments, as well as their collaborative song “Ye vs. The People.” During the brief interview, the artist also explained why he’s “not giving up” on the Chicago rapper despite his frustrations.

“The message that I was trying to put together with the song was directed to Kanye […] I’m at a loss of words,” he told the media outlet. “It’s hard for any of us to see exactly what direction he’s going in, and what his intentions, for real, are. I think we kinda gotta see it through. Any reaction we have immediately won’t serve us as well as us stepping back, and kinda giving it a minute to breathe, and just seeing how it all plays out for real.”

T.I then spoke of West’s intentions and why his comments are a reflection on the rapper’s personal well-being: “It ain’t hurt nobody but him, and that’s the conundrum,” he said. “Why would someone who has so much put himself in such harm’s way, such a direct line of fire. I don’t know.”

In regards to West’s controversial comments regarding slavery, T.I. said in closing, “No matter how much I disagree, I can say this: I do not feel it was malicious.”

For more on this, watch the video above.

In case you missed it, Kanye West also tried to explain his “slavery comments.” Read here.