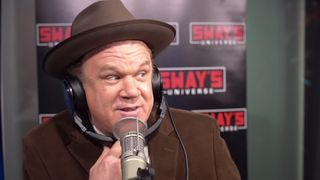 The musically talented John C. Reilly (Ralph Breaks the Internet, Step Brothers) once again proved he can span all genres on SiriusXM’s Sway In The Morning this week. The actor showed off his skills as a rapper with an impressive flow over Kanye and Common’s 2007 track, “Southside”.

Taking inspiration from Spoonie Gee’s 1981 song “Spoonie Is Back”, Reilly didn’t hesitate with lines such as: “People, all, let’s have a party / Now all young ladies just shake your body / Now all young men, enemy or friend / Well if you heard me once brother, I’m back again”. Perhaps it’s not surprising that the actor is familiar with rap, given he appeared in skits on A$AP Mob’s Cozy Tapes, Vol. 2 last year.

Reilly is probably best known for his comedic movies with Will Ferrell, but he’s also a talented singer, as he demonstrated in the parody film Walk Hard: The Dewey Cox Story. His next movie is Disney’s Ralph Breaks The Internet, sequel to Wreck It Ralph, out later this month.

Do you think Kanye would be impressed by John’s bars? Let us know in the comments.

For more in music-related news, Meek Mill has announced a new album. Find out more on that here.