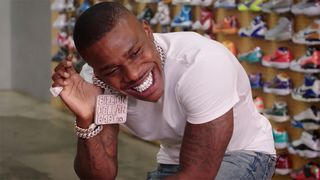 Fresh from earning his first number one album, buzzing rapper DaBaby appears on the latest episode of Sneaker Shopping. The Charlotte, North Carolina emcee met up with Joe La Puma at Flight Club in Los Angeles to discuss the album, titled KIRK, sneakers, style, and more, all while browsing the shelves.

DaBaby begins the episode by proclaiming his affinity for Air Maxes and Air Force 1s, specifically all-white Forces. He also discusses shopping at Foot Locker during off hours, as well as giving away sneakers to fans. From Charlotte, DaBaby touches on Michael Jordan and his hometown Hornets, insisting that he’ll be a part-owner of the franchise one day. Additionally, he hints at his plans to open a strip mall in his hometown.

Elsewhere on Sneaker Shopping, DaBaby speaks on LeBron James being into his music, Nipsey Hussle’s influence, and ’90s style. After watching the episode, you can revisit DaBaby’s new album, KIRK, below.