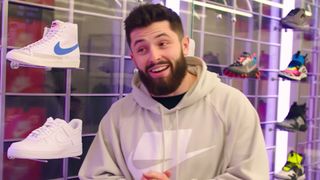 Recorded at a sneaker pop-up in Atlanta during the Super Bowl, the interview kicks off with Mayfield revealing that he’s a big fan of the classic Converse Chuck Taylor, and talks about not being a true sneakerhead from the start. “It’s different for me,” Mayfield said. “Growing up I wasn’t into it, but the more (I’ve) been around football and the more I saw the diversity you could do with the shoes and the different creativity people are doing with them, it’s exciting.”

In the segment, Mayfield is seen flaunting the OFF-WHITE x Nike SB Blazer “GRIM REAPERS,” and says that his wardrobe has changed significantly since leaving Oklahoma, as he’s now more fashion-conscious when going out in public. “Style evolves as you meet different people and you see stuff you like. I kind of have my own different swag now,” he explained. Mayfield also adds that he was gifted two pairs of kicks from LeBron James upon his arrival in Cleveland, which is something he’ll always cherish.

Later in the segment, Mayfield goes on to express his love for the Swoosh. “I was a Nike guy growing up,” Mayfield said. “When I got college and got to OU, it was a done deal. It felt like home and I had to.”

Now, click play above to see what he ended up copping.

Quavo Says He Has $3 Million in Shoes on ‘Sneaker Shopping’
MusicsponsoredJune 3, 2019

Blueface Says the Youth Is Why He Went Viral on ‘Sneaker Shopping’
MusicsponsoredApril 15, 2019

Gunna Says OFF-WHITE’s Air Prestos Are the Most Comfortable Shoes Ever on ‘Sneaker Shopping’
MusicsponsoredMarch 11, 2019